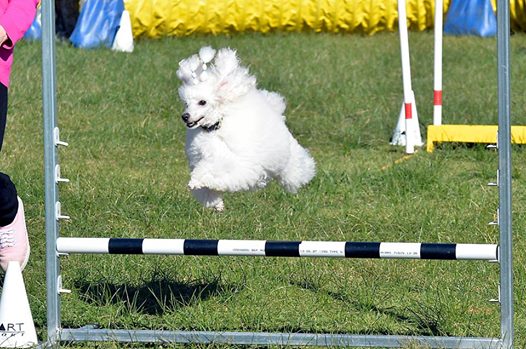 Dog agility hasn’t been around very long, only since the late 1970’s.  It originated in the United Kingdom at the Crufts dog show.  They wanted to add an entertainment factor to the show so a committee member, John Varley, was tasked with doing just that.  Coupled with a dog trainer, Peter Meanwell, they decided to use something similar to what the equestrian world used for horses.  The purpose was to show off the dog’s natural speed and agility to the audience during intermission for entertainment purposes.  By 1979 there were many British dog trainers that offered training in this popular, new sport.

By definition, dog agility is a sport where a handler directs a dog through a series of obstacles.  The dog is judged on speed and accuracy.  He is off leash and only directed by the handler’s words, not enticed by toys or treats.  During the course, the handler is also not allowed to touch the dog or the obstacles in any way.

The course is designed with safety first in mind.  There are a variety of obstacles used including A-frames, long jumps, hurdles, see-saws, tire jumps, tunnels, dog walks, wall jumps, and weave poles.  Some of the obstacles are designed for the dog to touch, such as the see-saw.  Others are meant for him to get through without touching, like the weave poles.  He is judged on his speed and accuracy of getting through these obstacles correctly.

There are so many benefits to training your dog in agility other that go deeper than getting through a course.  Because of the training that goes into training him for agility, it often helps to solve any behavior problems you may have encountered prior to the training.  You as his owner and handler become better at communicating with him.  Because the course is off leash, he can be relied upon to be off leash in other situations as well and listen to commands when you need him to.  Agility training is both mental and physical for a dog (as well as you!)  He will tire after his training sessions, but rest assured you have truly worked him well!  Ever notice how your dog seems more active after a good run or play session?  It’s because you may have worked his body but not his mind like agility training will do.  Not to mention, the bonding that occurs while you are working with your dog.  It is as much training for him as it is for you.

If this sounds like fun to you, then you might want to look deeper into agility training with your dog!  Agility is not breed or size specific, anyone can do this!  You can find out more information on the website for Agility Dog Association of Australia at  www.adaa.com.au